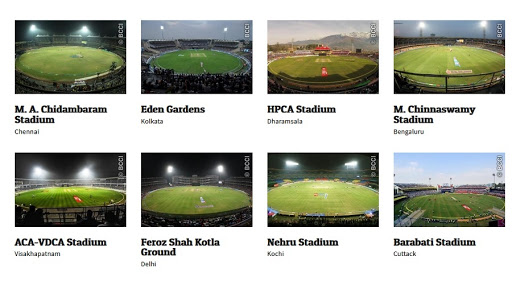 Cricket is religion, and cricketers are worshipped next only to God. This is the power of this game, and despite numerous diversities in the country, cricket is one game that binds Indians and makes them feel for the game at the same chord. So when it comes to giving the spectators the magnificent view of the game they swear by, there can be no compromise on the facilities in the stadium. Thus, larger than life stadiums with grandeur facilities are what the die-hard cricket fans want. Cricket stadiums in India are at par with international standards and add to the experience of the players and the audience. One such opulent cricket stadium in India is Sardar Patel Stadium which happens to be the largest cricket stadium in India.

Remember the thumping sound of Sachin! Sachin! echoing in the Wankhede Stadium in Mumbai.  You can expect a similar sound reverberating in Sardar Patel Stadium now when Kohli will hit a six or Ashwin will spin the bowl. Sardar Patel Stadium in Ahmedabad is the largest cricket stadium in India which has a seating capacity of 110000. Named after The Honourable Prime Minister Sh. Narendra Modi, Montera as it is called now was inaugurated in February 2020 by the Indian President Ram Nath Kovind and Home Minister Amit Shah. During the official visit of US President Donald Trump to India in February 2020, he addressed 100000 people in Montera and was swept by the infrastructure of the stadium.

The Capacity of the Stadium

Montera has been developed after demolishing the existing stadium which was constructed on 63 acres of land. The current stadium has been developed on the same site and today the seating capacity is double that of its predecessor.

Amenities in the Stadium

Montera is now the home of Gujarat Cricket Association and has 76 corporate boxes, 3 practice grounds, 4 dressing rooms, 55 room club-house, Olympic size swimming pool, indoor cricket academy and numerous other state-of-the-art facilities which have made it grab the title of the largest cricket stadium not only in India but in the world by surpassing Melbourne Cricket Stadium. 11 clay pitches, special LED lights along the circumference of the stadium enhance the experience of the spectators.

Cost of the Project

An amount of 110 million dollars or 8 billion has been spent constructing this majestic stadium.

Engineers Behind the Design of the Roof

Walter P Moore is known for designing complex structures and every new building which they construct is an outcome of the challenges the company wishes to take. Montera is a classic example of the outstanding work done by the engineers and innovators at Walter P Moore. Since Ahmedabad is located in the level-3 seismic zone, so the roof system at Montera had to be lightweight to minimize seismic demand. Thus, the tensile fabric roof system, which is seismically detached from the concrete seating bowl and is supported by steel “V” columns, has been designed by Walter P Moore.

The layout of the Stadium

If you have been dreaming of an unobstructed view of the match, your wish will come true at Montera. The stadium is designed in such a way that there will be no hindrance in the view irrespective of the stand you are in.

The drainage system at Montera is such that the ground will dry up quickly, and no matches will be postponed due to rains.

If watching your favourite cricketer playing on the field is your dream, then visiting Montera has to be on your priority list for an overwhelming experience!

The Eden Gardens need no introduction to a cricket fan. Established in 1864, it is the oldest and the second-largest cricket stadium in India after the newly build Sardar Patel Stadium. Its current capacity is 80,000 which was reduced from 1,00,000+ in 2011 due to construction and renovations. Still, Eden Gardens is one of the largest cricket stadiums in India. The stadium is operated by the CAB, Cricket Association of Bengal, and is the home ground of the IPL team Kolkata Knight Riders.

Formerly known as the Visakha Stadium, the Rajiv Gandhi International Cricket Stadium is located in Hyderabad, Telangana. Owned and operated by the Hyderabad Cricket Association (HCA), the stadium has a capacity of around 55000. The ground is also the venue for the home matches of the IPL team Sunrisers Hyderabad. The HCA, named its North Stand after VVS Laxam on his retirement from the game to honour the star from Hyderabad.

The Greenfield International Stadium or The Sports Hub, Trivandrum is a multi-purpose sporting facility in Kerala. Used mainly for Cricket and Association Football, the playing arena has been constructed in line with FIFA and ICC norms and regulations. Built on the land leased by Kerala University the stadium is operated by the Kerala Cricket Association and Kariavattam Sports Facilities Limited (KSFL). The stadium has a capacity of around 55000 and is the first eco-friendly stadium in India.

Formerly known as the Madras Cricket Club Ground, the stadium is popularly known as the Chepauk Stadium. Named after former BCCI President M. A. Chidambaram, the Chepauk Stadium is owned and operated by the Tamil Nadu Cricket Association. It has a capacity of around 54000 and is the home ground of the IPL team Chennai Super Kings. Chepauk is famous for its knowledgable and appreciative crowd.

Formerly known as the Ekana International Cricket Stadium, it is an international standard cricket stadium built under public-private partnership located in Lucknow, Uttar Pradesh. Owned and operated by the Ekana Sportz City, the stadium has a capacity of around 50000. On 6th November 2018, the stadium hosted its first International match becoming the 52nd venue in India to host international cricket. In that very match (T20I) against the West Indies, Rohit Sharma became the first cricketer to score four centuries in T20Is.