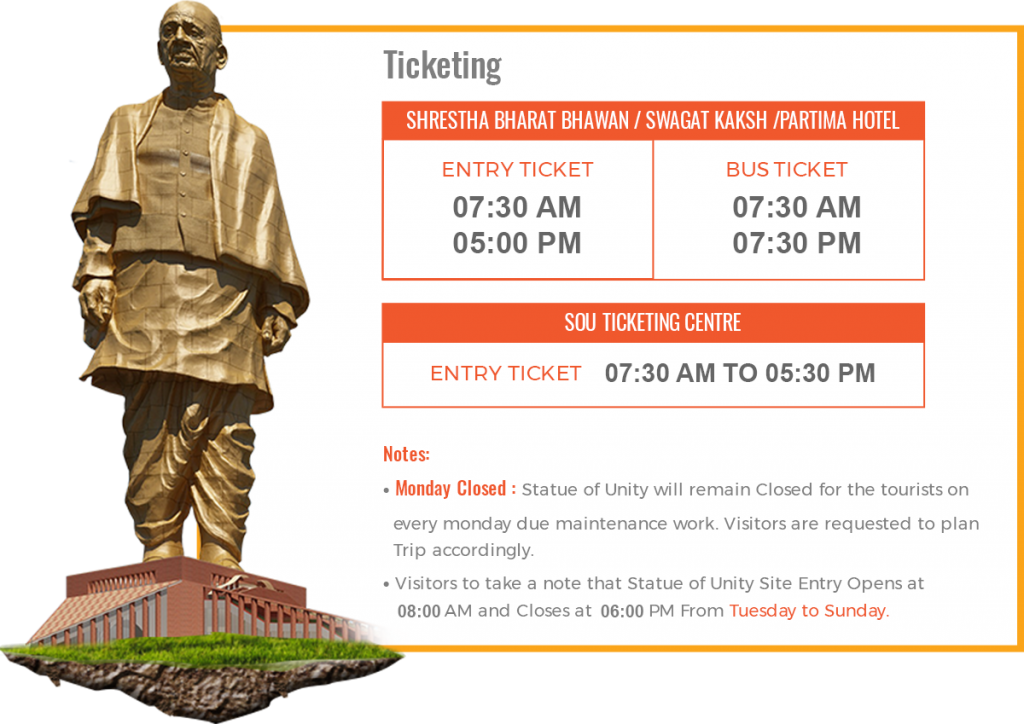 The entire universe is a family and The Statue of Unity is an architectural marvel in Gujarat in India which justifies this statement. Who would have thought that the world’s tallest statue would stand with its head high in a small town called Kevadiya in Gujarat? The vision of the Honourable Prime Minister Sh. Narendra Modi to dedicate a monument to the “Iron Man of India”-Sardar Vallabh Bhai Patel got wings when the project was announced in 2010 and the construction began in October 2013. The Statue of Unity was inaugurated on the 143rd birth anniversary of a distinguished leader who was India’s first Deputy Prime Minister and was instrumental in unifying 560 princely states across the country. It is a landmark attraction that has not just brought laurels to Indian architecture but has conveyed a strong message to the people worldwide that India believes in unity and stands for unity until eternity.

What is The Statue of Unity?

When you read about Spring Temple Buddha in China or Ushiku Daibutsu in Japan, the first thing that crosses the mind is the magnificent height of these statutes. Today, in your country, you have the world’s tallest statue standing 600 feet tall or stands at the height of 182 metres, a symbol of unity in diversity. Dedicated to the Iron Man of India, Sardar Vallabh Bhai Patel, The Statue of Unity is an outstanding tribute to the man who brought the princely states together after independence. Had it not been for him, our history would have been different and jeopardized.

Where is the Statue of Unity located?

The address of this iconic architecture is Sardar Sarovar Dam, Kevadiya Village, Narmada, and Gujarat.

Located 3.5 km from the nearest town Kevadiya, The Statue of Unity stands atop Sandhu Bet Island on the Narmada and faces Sardar Sarovar Dam in Kevadiya Colony which is around 100 km from Vadodra.

Cost and construction of the project

This architectural wonder was built for Rs 2989 crores. Larsen & Turbo, the Indian Infrastructure Company, won the contract for designing, constructing, and maintaining the Statue of Liberty and began the work in October 2013. L&T has entered into a 25-year contract for the maintenance and upkeep of the Statue of Unity. Designed by Sh. Ram V. Sutar, Statue of Unity, was inaugurated on 31st October 2018 by the Honourable Prime Minister Sh. Narendra Modi.

Design of the project

Designing something as opulent and as grand as The Statue of Unity was an arduous task. Ram Sutar’s son, Anil Sutar told that there was a lot of groundwork done before finalizing the Iron Man of India's expressions and posture, so that justice could be done to someone of his stature who despite all odds, demonstrated unmatched confidence and poise in his demeanour. With head held high, hands on the side and shawl on the shoulders, the statue has been designed in such a way that it reflects the persona of one of the greatest leaders in Indian history.

Features of the Statue of Unity

Statue of Unity is more than just a colossal structure because this engineering wonder is a means to pay tribute to the man behind the integration of princely states in India. Constructed in 46 months, the Statue of Unity has been attracting a sea of tourists since its inauguration because of the following features:

The statue is divided into 5 zones, but only 3 remain open for the public.

Timings to visit the Statue of Unity

The Statue of Unity is open for tourists from Tuesday to Sunday from 8 AM to 6 PM. Avoid going on weekends for a better experience. The Statue of Unity remains closed on Monday. On average, you will need 1.5 hours to explore the site.

Entry ticket to Statue of Liberty

It is advised to book your tickets online and keep a hard and soft copy handy so that the same can be handed over wherever necessary. You can visit the official website of Statue of Unity which is www.statueofunity.in, and get the ticket booked.

The entry ticket is segregated into two parts:

For the observation deck view, the charges are:

Express Entry Ticket costs Rs 1030 for adults and children, and this gives a free pass to the Statue of Unity without having to wait in the queues.

How can you reach the Statue of Unity?

The nearest airport is Vadodra Airport, and the nearest bus stop and railway station is Kevadia Bus stop and Vadodra Railway Station, respectively.

What are the other attractions near The Statue of Unity?

From riverfront cycling to river rafting and much more awaits you when you visit the grand Statue of Unity! Get your tickets booked and see this majestic monument.