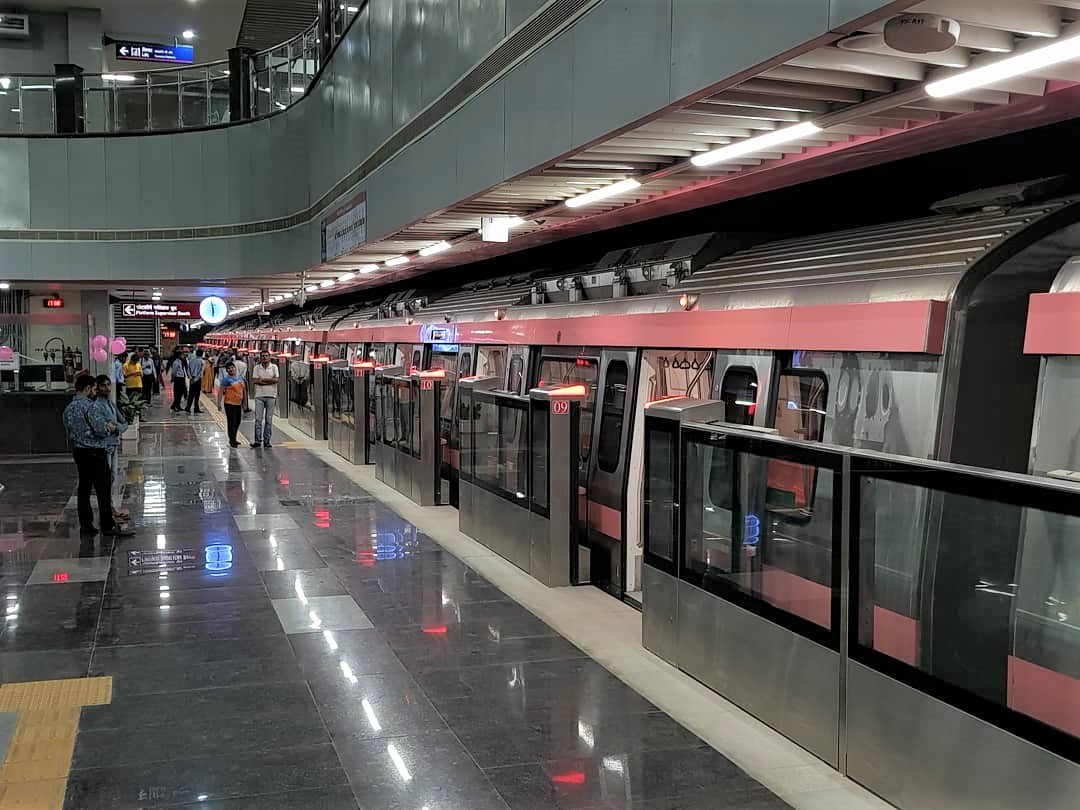 Everything about Delhi Metro Pink Line

The Delhi Metro Rail Corporation or DMRC launched a tender inviting construction work on a 1.4 km long section of the Pink Line between the two stations, Mayur Vihar Pocket-I and Trilokpuri Sanjay Lake. DMRC officials have said that the work will take eight months to complete and the public can start using this section of the pink line Metro from the middle of 2020.

One stretch of the pink line, the one that runs between Lajpat Nagar and Mayur Vihar Phase-I has been open for the public from 31st December 2018. The Pink Line Delhi Metro now has 38 stations which run from Majlis Park to Shiv Vihar. The implementation of the Delhi Metro Pink Line has reduced the time taken to travel between south and east of Delhi by 15 minutes.

The Pink Line connects north-west and north-east Delhi, and is almost 59 km long, which makes it the longest line in the Delhi Metro network. It also features the smallest metro station in India, located at Ashram, and Dhaula Kuan is the highest point in Delhi Metro line.

The pink metro line runs in a U-shape over the Delhi Ring Road, and it is often called the Ring Road Line. There are 12 underground and 26 elevated stations. The highest point is at Dhaula Kuan, at 23.6 meters, which is as high as a seven-floor building.

Even though the Pink Line is completely operational and completed, a small part of the line is expected to be completed only by August of 2019 – between Trilokpuri and Mayur Vihar Pocket I. Local residents had raised some issues about the building of a 1.5 km long aqueduct, and this is what the metro has been trying to resolve for a long period.

The Delhi Pink Line connects all other existing and forthcoming lines, with interchanges located at 12 out of the 38 metro stations. The stations that have interchanges with the Pink Line are as follows:

The Durgabai Deshmukh South Campus Metro station belonging to the Pink Line and DhaulaKuan Metro station belonging to the Airport Express Line are connected by a skywalk, which was inaugurated on 9th February 2019. This footbridge will make it much faster and easier to reach the New Delhi airport and the New Delhi railway station for people who live in east, north, and west Delhi.

Delhi metro fare is fixed. according to where you start journey and where to end. Minimum fare of Delhi metro is 10 rupees and maximum fare is 60 rupees .

The Pink Line will make use of some of the most advanced technology, amongst all of the Delhi Metro corridors. A standard gauge will be used to run the line, and there will be trains that are driverless trains or Unattended Train Operations, shortened to UTO. Initially, though, drivers will be in charge of these trains, but they will gradually move and be replaced by technology. The stretch will also use a new signaling technology, which is called Communication Based Train Control or CBTC. This technology is supposed to enhance coordination between trains that arrive from different directions, and this will have a direct effect on the frequency of trains.

The Delhi Metro Pink Line will make commuting much easier and reduce travel times. It is a showcase of the way latest technology can help human lives become better.

The Pink Metro Line was opened to the public in four stages, beginning from March of 2018 to December of the same year. Because there were issues with land acquisition in some stretches, the original deadline for completion in December 2016 could not be met. Thereafter, it was postponed to April 2018. Then, the Pink Metro line was constructed in parts and finally it reached completion in December of 2018, when the Lajpat Nagar – Mayur Vihar Pocket I corridor was inaugurated.

Here is how from March 2018 to December 2018, the pink line became operational:

Delhi gained entry to a select group of global cities like Shanghai and London when the 17.8 km long Trilokpuri Sanjay Lake to Shiv Vihar became operational on 31st October 2018, which have a metro network that is operational for more than 300 kms. The Delhi Metro network grew to almost 327 km, with 236 metro stations, with the inauguration of the most recent corridor on 31st December 2018.

The corridor that has Lajpat Nagar to Mayur Vihar Pocket I, became operational on 31st December 2018, is 9.7 kms in length, and it has the following stations in its route:

The expected completion date for the section between Mayur VIhar Pocket I and Trilokpuri is 31st August 2019, due to the delay in construction of a 1.5 km long viaduct at Trilokpuri. This has resulted in the Pink Line having two independent train lines, with trains running from Majlis Park and going up to Mayur Vihar Pocket I and trains coming from Shiv Vihar ending at Trilokpuri Sanjay Lake.