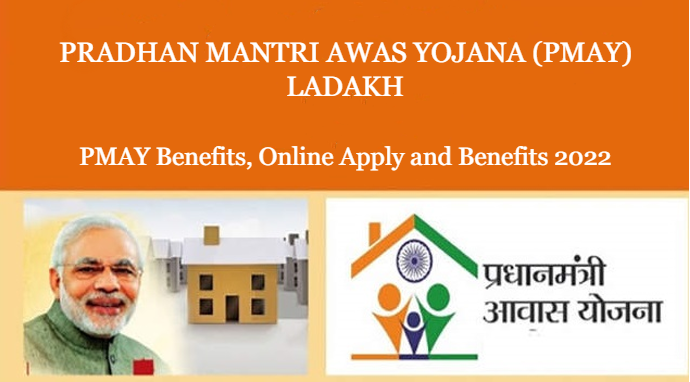 On June 25, 2015, the government of India introduced the Pradhan Mantri Awas Yojana Ladakh (Urban) Mission, the goal of which is to provide adequate housing for all people living in urban areas by the year 2022. The Mission gives Central Assistance to the implementing agencies for delivering dwellings to all eligible families or beneficiaries against the verified demand for houses for roughly 1.12 cr.

The size of a home for an Economically Weaker Section (EWS) might be up to 30 square metres of carpet space, according to the criteria for PMAY (Urban). However, States/UTs have the freedom to increase the size of dwellings, as long as they discuss and get clearance from the Ministry.

As a continuation of this government's efforts toward the empowerment of women from EWS and LIG, the PMAY (Urban) has made it a mandatory provision for the female head of the family to be the owner or co-owner of the house under this Mission. This is in contrast to earlier schemes, which did not include this provision.

PMAY's several verticals (Urban) It was decided to adopt a basket of possibilities so that a wider number of people could be included, and these options would vary according on individuals's levels of income and financial stability as well as the availability of land.

The public housing programme in the nation had its start with the rehabilitation of refugees shortly after the country gained its independence, and ever since then, the government has made it a primary emphasis area as an instrument for the reduction of poverty in the country.

In January of 1996, the Indira Awaas Yojana (IAY) was the initiative that kicked off the Rural Housing Project as an autonomous programme. Although the IAY was successful in meeting the need for homes in rural regions, the concurrent reviews and the performance audit that was conducted by the Comptroller and Auditor General (CAG) of India in 2014 revealed a number of shortcomings in the programme.

These voids, often known as the lack of housing assessments, The shortage, the lack of transparency in the selection of beneficiaries, the low quality of the house and the lack of technical supervision, the lack of convergence, the beneficiaries not availing themselves of loans, and the weak mechanism for monitoring were all factors that limited the impact and outcomes of the programme.

In order to fill these holes in the rural housing programme and in light of the government's commitment to achieving its goal of "Housing for All" by the year 2022, the Indira Awaas Yojana (IAY) was reorganised into the Pradhan Mantri Awas Yojana Ladakh– Gramin (PMAY-G) on April 1, 2016. This change came into effect as of that date.

The support that is provided for the building of toilets must be leveraged via convergence with SBM-G, MGNREGS, or any other source of finance that is specifically designated. Convergence of various government programmes, such as those dealing with piped drinking water, power connection, LPG gas connection, etc., is something that has to be tried.

In plain regions, the cost of unit support is going to be split between the Central Government and the State Government in the ratio of 60:40, while in the North Eastern and Himalayan States, the ratio is going to be 90:10. Ninety percent of the money allocated from the yearly budgetary allocation for PMAY-G would be distributed to the states and territories for the building of new houses under PMAY-G.

How can one apply for PMAY-G?

To be eligible for benefits under the PMAY-G programme, a person must not only be homeless but also live in a household with zero, one, or two rooms that has kutcha walls and kutcha roofs (referred to as kutcha houses), as determined by the SECC data and the Awas+ survey. However, there are certain requirements that must be met.

They have been recognised thanks to a list that was compiled with the assistance of surveys conducted at the national, state, and gramme panchayat levels, including the Socio-Economic and Caste Census (SECC 2011). This list indicates the real beneficiaries who are houseless, and the beneficiaries who are houseless but are not on this list may contact local offices to seek redress if they feel they have been wronged.

After the list has been compiled in its final form, a sanction order will be issued in the beneficiary's name. In addition, the recipient will get an SMS informing them that the sanction has been issued in their favour.

Beneficiary has the option of collecting the sanction order from the Block Office or downloading it from the PMAY-G website using his PMAY-G ID. Both options are available to the beneficiary. Within a week (7 working days) after the day the sanction order was issued, the first payment was to be sent electronically to the beneficiary's registered bank account. This was to take place within a week of the date the order was issued.

Additionally, a 4 percent allocation would be made towards administrative costs in this scenario. As a reserve fund for any unique projects that may arise in the future, the central level is required to set aside five percent of the total budgeted grant. The yearly allocation to the states is to be determined by the Annual Action Plan (AAP), which must be approved by the Empowered Committee. The funds for the states and unincorporated territories are to be distributed in two equal payments.

Beneficiary selection is one of the most crucial aspects of the Public-Private Partnership Act of 2009 (PMAY-G). PMAY-G, rather than selecting a the beneficiary from among the BPL households, selects beneficiary using housing deprivation parameters in the Socio Economic and Caste Census (SECC), 2011 date, which is to be verified by the Gram Sabhas. This is done to ensure that assistance is targeted at those who are truly deprived and that the selection is objective and verifiable Pradhan Mantri Awas Yojana Ladakh. Using the data, families who are houseless and those that live in homes with 0, 1, or 2 kutcha walls and kutcha roofs may be isolated and targeted for assistance. The SECC data captures particular forms of deprivation among households connected to housing.

The Permanent Wait List that is established in this way also guarantees that the states have the ready list of the households that will be covered under the programme in the next years (by Annual Select Lists), which leads to improved planning of implementation. An appeals mechanism has also been established to address any concerns that may arise about the selection of beneficiaries.

The recipient will get assistance via in-house construction with a variety of home design typologies that include catastrophe resilience characteristics that are appropriate for their regional geo-climatic circumstances. These designs are generated by an involved process that involves the public in various consultations.

Using AwaasSoft and the Awaas App, the PMAY-G program's implementation and monitoring are going to be carried out according to the guidelines of an end-to-end electronic governance model. While AwaasSoft is a work-flow enabled, web-based electronic service delivery platform that will be used to carry out all of the critical functions of PMAY-G, right from the identification of beneficiary to providing construction linked assistance (through PFMS), AwaasApp-a is a mobile application that will be used to monitor real time, evidence-based progress of house construction through date and time stamped and georeferenced photographs of the house.

This will be done using the AwaasApp During the course of the execution of the programme, the two information technology applications assist detect any hiccups that occur in terms of the attainment of goals. Every payment that has to be made to a beneficiary must be made by direct bank transfer to the recipient's bank or post office account that is recorded in Awaas SoftMIS.

Each state is responsible for developing their own Annual Action Plan for the PMAY, which must have a strategy for integrating the initiative with other government programmes. The mechanism for convergence in PMAY-G is also going to be reinforced via a system-to-system real-time transmission of information between the programmes that are going to converge with PMAY-G. This transfer of information is going to take place between the programmes.

It is planned to make it easier for beneficiaries who are ready to do so to get institutional financing of up to Rs. 70,000, the progress of which would be monitored by the SLBC, DLBC, and DLBC.

Not only will the implementation of the programme be monitored electronically, but it will also be monitored through the participation of members of the community (Social Audit), members of parliament (DISHA Committee), officials from both the central and state governments, National Level Monitors, etc.